Once upon a time there was a little not quite entirely black dog getting ready for a day trip to Niagara-on-the-Lake.  Her name is Penny.

Maia likes to explore the outdoors, but only when close to home; otherwise she is scared she might get lost.

Before going for a car ride Penny went to the yard with her foster sister Maia.

Penny likes to explore and so does Maia, but they do this in very different ways, because Maia is a cat and Penny is a dog.

When Penny was ready she got into the car with her foster parents, Nancy and Derek.

Maia stayed home being lazy in a sunbeam.

When they arrived at Niagara-on-the-Lake, everyone got out of the car and went for a walk.  Penny saw and sniffed many things along the way. 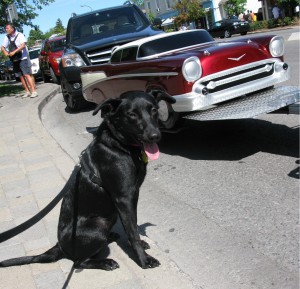 Nancy thought this small model car was the perfect size for pint-sized Penny to drive. If little black dogs could drive little toy cars that is. 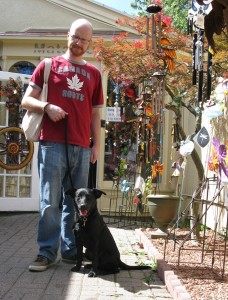 Penny liked the colourful moving parts of the whirligigs in the sun, but was not so keen on the sounds of the chimes.

in the sun with 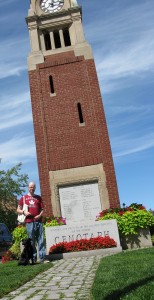 Nancy was in a hurry because others wanted to take their photos in front of this monument too. This is what happens when you rush.

She saw and sniffed the Queen Street cenotaph that honours the people of Niagara-on-the-Lake who died in war serving Canada; and learned a cenotaph is a monument in memory of a person or group of people whose remains are elsewhere.

Nancy took this photograph and it turned out askew; so the cenotaph looks like it’s leaning in the picture.  Tsk tsk Nancy! 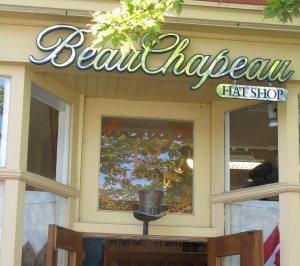 Next, the three of them walked along the Niagara-on-the-Lake strip window shopping.  Nancy tried to get Derek to buy a hat to protect his head from the sun, but he thought the Beau Chapeau hat shop looked too dressy for him.  Nancy really liked the Glasgow ivy cap in taupe for Derek.

Though Penny is still very much a puppy in her exuberance, she does wait patiently with a foster parent whenever it’s needed.

Before lunch Nancy decided to pop into a couple shops to see their wears, but nothing more struck her fancy so she didn’t buy anything. 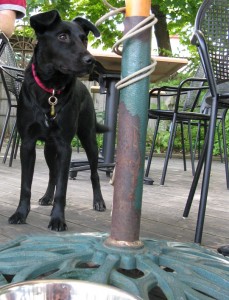 Penny was very interested in the large yellow labrador retriever that arrived on the patio, but she was also very good & didn’t bark or pull so Nancy & Derek were able to enjoy their lunch.

Derek, Nancy and Penny found a nice, pet friendly patio in the shade to have lunch at The Epicurean.  Moments after sitting down, while Nancy and Penny waited for Derek to return with mushroom and leek quiche and a side of gazpacho, Penny investigated the patio area around our table and lay down to relax.

Shortly after Derek returned, Penny stood up to watch a large yellow Labrador Retriever dog arrive on the patio.  Though she was curious to meet him, she behaved very well and allowed Nancy and Derek to enjoy their lunch without a fuss. 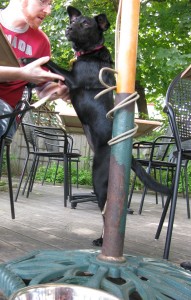 Penny standing up with Derek’s help to show off how big she is (though she is actually little).

Once Nancy and Derek were done eating, Penny was offered a snack.  She ate it and was also rewarded for her good behaviour with a little extra attention from Derek before we moved on.

After lunch Nancy wanted dessert.  Derek suggested ice cream and off they went looking for an ice cream shop.  There were a couple places on the main strip, even one for gelato.

Tummies content, the three of them walked on towards the sound of music, which led them to the park where a band was playing fife and drums.  Penny had never heard such sounds before and didn’t quite know what to make of it.